Copper, fundamental to the development of Argentina. Latinominería.

Copper, fundamental to the development of Argentina. Latinominería. 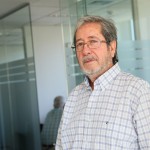 This article seeks to respond to technical concerns raised about copper mining in the Republic of Argentina and explains why copper mining has not been developed prior to the start of production at Bajo de la Alumbrera in 1996.

The modern search for minerals, particularly the exploration for copper in Argentina, began in 1940 with the creation of the General Department for Military Manufactures (DGFM, from its initials in Spanish). During the 1960s and 1970s, the governmental body developed exploration plans which led to some international companies to identify copper mineral deposits, such as Bajo de La Alumbrera and Mi Vida (today Agua Rica) in Catamarca and El Pachon in San Juan. However, at this time, mining in Argentina entered a period of lethargy (1973 to 1990), where just a few significant private and international projects were timidly developed in provinces in the northeast of the country.

However, a government plan to attract efficient investment by junior companies began to bear its first fruit of an intense risk exploration in the provinces of Jujuy, Salta, Catamarca, La Rioja, San Juan, San Luis, Mendoza, La Pampa, Rio Negro, Chubut and Santa Cruz. Beginning in 1996, some major operations began to be developed. These include La Alumbrera (copper and gold, 1996), Cerro Vanguardia (gold and silver, 1997), and Fenix (lithium and potassium, 1997) and have allowed the development of a number of metallic mining projects in Jujuy, Catamarca, San Juan and Santa Cruz. Argentina is beginning to feature among of the world’s leading producers of copper, gold, silver, and zinc.

The first metallic mine to open in Argentina through the application of Law No 24,196 on mine investments (approved in 1992) is Bajo de la Alumbrera: today the country’s only operating copper mine. During the last seventeen years, around fifteen metallic mines have enter production, mostly mining precious metals, but no new copper mines have been built, despite the discovery of major copper reserves and resources.

With just one mine in operation and with an annual production to date of around 160,000 tons of fine copper, Argentina is ranked sixteenth amongst the world’s copper producers.

However, exploration by many companies during the last fifteen to twenty years have identified a number of world-class copper projects. This level of knowledge and mineral resources together with the right market conditions and favorable policies could develop producing mines within a relatively short period.

The current analysis only includes deposits with mineral resources containing more than 800,000 tons of copper (equivalent to a resource of 160 million tons, grading 0.5% Cu), supported by a study, whether NI 43-101, JORQ or any other considered acceptable by the geological and mining community. For the effects of the technical and economic tests, proved and probable reserves and measured, indicated and inferred resources will be taken into account.

Other variables will also be considered, such as: 1) equivalent copper grades, for resources which also contain gold, molybdenum and/or silver, using current values of US$3.50 a pound of copper; US$21 a pound of molybdenum; US$1,500 a troy ounce of gold; and US$30 a troy ounce of silver; 2) it is assumed that the whole of the mineral resource can be extracted during the life of the mine; 3) a mineralogical process which can recover 80% of the resource is assumed; 4) a processing capacity is assumed in line with the size of the available resources; 5) investment in construction comparable with international projects; 6) it proposes a forecast copper price of US$3.20 (2013 basis) over the life of the operation; 7) an equivalent production cost of US$1.20 a pound of recovered copper; 8) a brief analysis of the implications of the taxation of mine operations considering a rate of 52% on profits. Finally a start-up date is forecast for each mineral deposit.

The following tables present a summary of copper resources and reserves of the main projects updated to February 2013 and the mine life which these resources would imply for an eventual operating mine. In addition, a basic analysis is presented of the revenues which these operations would generate.

Table 2 shows a basic economic analysis and predicts a start-up date for each operation.

The largest copper deposits are El Pachón, Taca Taca and Agua Rica. Middle-ranking, although still important, resources include Los Azules, José María and El Altar, while smaller still are the remaining reserves at La Alumbrera, the resources in development at Rio Grande, the resources and reserves at San Jorge, and the existing uncertified resources at Paramillos and Famatina.

The best positioned provinces in this analysis are: San Juan, Salta and Catamarca (Figure 1), which have maintained  favorable conditions for mining for some time and despite the difficulties.

In line with current political and technical circumstances, environmental conditions and construction times, it is expected that the first deposit to enter production will be Agua Rica which will completely replace Alumbrera. It will be followed by San Jorge, together with Rio Grande by the end of 2016. These will be followed within a short period of time by Los Azules, El Altar and Taca Taca in 2019 and 2020. El Pachon, Jose Maria, Famatima and probably Paramillos would begin operations beyond the horizon of 2025 assumed for this analysis.

Figure 2 displays an analysis based on the data presented in Tables I and II where the resources currently available will permit an increase in production to around 1.6 million tons of fine copper by 2021. The graph shows three lines of future production, labelled optimistic, realistic and conservative.

Why has copper mining not been developed in Argentina?

The work of exploring and certifying reserves in copper porphyry deposits considered here need more time and resources than precious metals deposits. In addition, the investment required to develop and bring a major copper mine into production is much greater than that required to develop a gold and silver vein deposit.

In addition, state policies need to be strengthened to allow major copper producers, such as BHP Billiton, Rio Tinto, Xstrata Copper, Freeport McMoRan, Teck, Southern Copper, Antofagasta Minerals and Vale, among others, to return or established themselves in the country and develop projects with local companies or other foreign companies based in Argentina. The answer is that, given the current attitude among investors, there is a great deal of fear and mistrust which must be overcome in the short term.

How much do we know about Argentina’s geological potential and how important is the exploration of the country’s copper deposits?

It is clear that less copper exploration has been carried out in Argentina than in Chile or Peru. However, given the current state of affairs, there is a great deal of geological information about the distribution and size of the country’s mineral resources, sufficient to continue identifying new deposits, especially in covered ground or at depth.

What are the critical issues at the moment for the development of mining in Argentina?

Derogate unconstitutional, laws such as Law 7722 in Mendoza which has made projects completely viable, such as San Jorge in the Uspallata Valley and prevented the exploration of Papagallos in the Uco Valley.

End the growing appetite for taxes in provinces such as Chubut which after postponing anti-mining legislation is expected to impose excessive and unrealistic tax rates, which instead of favoring mine development will block and delay investments. Santa Cruz has tried to implement this type of tax pressure without obtaining the expected results.

Improve the interest and will to develop mining amongst political leaders of provinces such as La Rioja, where smaller environmentalist groups have put at risk well-intentioned government policies for five years and delayed the development of one of Argentina’s most attractive prospects (Famatina) as well as an impoverished community.

Despite all this, Argentina’s mining industry and the exploration for copper is making clear progress in provinces such as San Juan, Santa Cruz, Catamarca and Salta.

During the PDAC 2013 in Toronto, executives from some of the countries which have invested and are operating in Argentina expressed their concern about the policies adopted by the national government, especially to restrict the transfer of profits abroad, and growing inflation, which have caused local costs to shoot up. The government counters that these are transitory measures, which seek to control the flow of funds and national interests, and that they are becoming more flexible.

While it is true that some companies are delaying projects in Argentina, such as Vale, there are others like Yamana and Barrick which continue to develop major investments.

The final message is clear: If Argentina wants to develop mining as part of its economy, it must refine the conditions in which copper deposits can be developed. 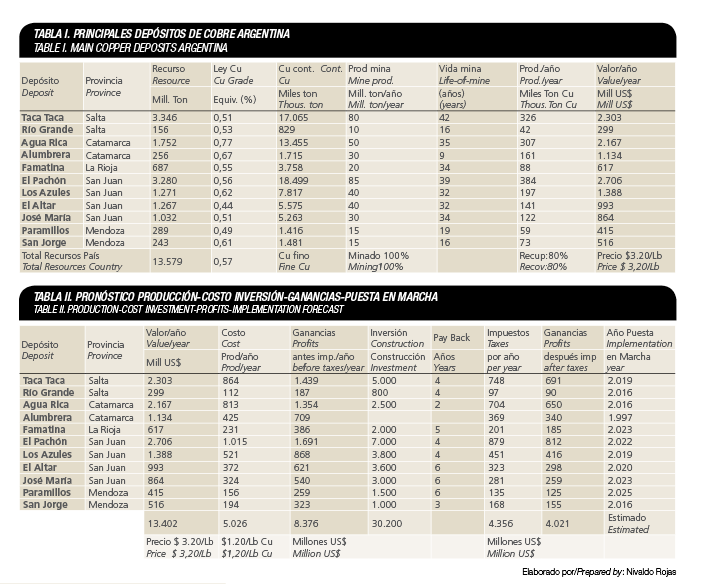